So it’s been established that I should not be allowed to roam St. Lawrence Market unsupervised. It’s like giving a kindergarten kid a hundred bucks and sending them to the candy store… a bit too much of a good time.

For those of you who don’t know the St. Lawrence Market, it’s the largest indoor market in Toronto and consists of two buildings. The North Market is home to weekly farmer’s markets and antique markets, while the South Market is a two-floor food market filled with fruits, vegetables, meats, cheeses, seafood, pasta, wine, restaurants, bakeries, cafes, florists, and even kitchen ware (everything you could think of). For those of you who do know the market, you can probably understand why I lose control when I’m there. It’s like a food lover’s dream come true.

Saturday afternoon I decided to head over to the market just to “check it out”. After a morning of blogging, I thought it’d be nice to get outside for a bit and maybe I’d pick up a bunch of flowers and some oysters for a snack. I live close enough for it to be a nice (but chilly) walk along the lakeshore to get there.

I get so excited walking in that place. You’re greeted with the smell of food cooking and the sounds of the busy marketplace. There’s so much to see. There are customers busily moving from stall to stall, children exploring, couples eating, merchants calling out their specials of the day, little crowds forming where taste-tests are being offered, cameras out snapping shots of the displays, and maybe a couple of people like me…standing and watching, overwhelmed by all the excitement.

I saw all sorts of fresh seafood and couldn’t resist. It started at the Seafront Fish Market with two dozen Blue Point oysters and a pound and a half of their live P.E.I. cultivated mussels. When I walked over to Domenic’s Fish, which is my personal seafood favourite at the market, and saw more oysters. They had Kumamoto and Duxbury oysters. What harm could another dozen oysters do? I added six Kumamotos and six Duxburys to my collection.

I like Domenic’s best because the seafood they sell me is always fresh and I find their prices are often better than at the other seafood stalls (the Blue Point oysters were cheaper at Domenic’s but I was so excited when I first entered the market I had already bought my two dozen before I had a chance to realize). On top of that, all the staff are very friendly. They have great answers to my questions about the seafood I’m buying and also give me tips on how to cook it and what other ingredients I might want to pick up. They often have end-of-day sales on certain items too. Shrimp were 20% off, so I figured I’d pick up a pound or so of Tiger shrimp as well…I was slowly planning for a seafood feast.

It may not seem like I bought TOO much, but all the shellfish were starting to get quite heavy. There was also the added weight of the ice they gave me, to keep my oysters chilled on the trip home. Right before I checked out, I asked for a King Crab leg (I couldn’t help myself!) and ended up also carrying one giant club of a crab leg with me. (I’ve never bought King Crab legs before…$35/lb, whoa!) On top of this, I was trying to take pictures with my free hand as I moved along with the crowd. The pictures were not much of a success. Boo. 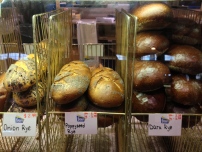 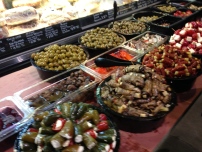 In my head, I quickly ran through what I’d be cooking tonight and realized I needed some other ingredients. I could hardly carry anymore, if I wanted my walk home to be the least bit enjoyable. I narrowed my list down to grape tomatoes and an onion. I could always stop by the grocery store later for the remaining bits and pieces…which I did end up doing. I picked up all the other ingredients I needed, PLUS a live B.C. Dungeness crab. My favourite. 🙂 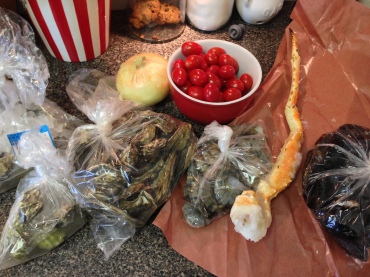 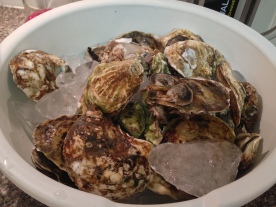 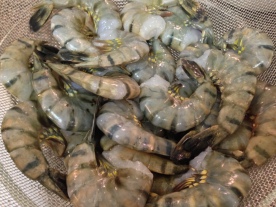 After the grocery store run, it was seafood-cooking frenzy. Mussels were cleaned and steamed, oysters shucked, shrimp cooked, crab boiled, and we made a Caesar salad with our FAVE homemade dressing. This Caesar is so good, you could eat a whole bucket to yourself. If you missed my Caesar salad post, you’ve got to try out the recipe.

Shucking a Blue point oyster (Kumamotos on the side)

Found a Pea Crab in one of the Blue Points!

We did a simple crab boil. I love fresh lobsters and crabs boiled or steamed, it’s the best way to eat them. They’re so delicious and full of flavour on their own. I tried making a spicy Creole shrimp for the first time. It was GREAT, and had a super spicy kick to it! I’m going to post the recipe soon. 🙂 The mussels were steamed in a curry broth with onions and grape tomatoes. I wasn’t perfectly satisfied with these mussels, the recipe still needs work. But the mussels were nice and plump! 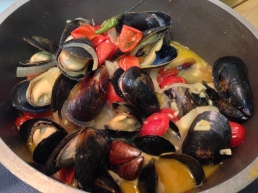 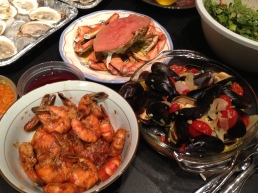 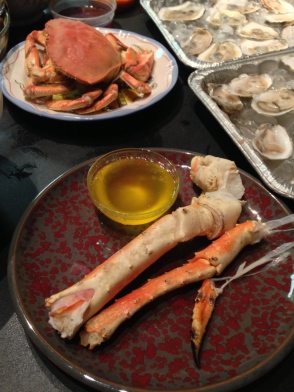 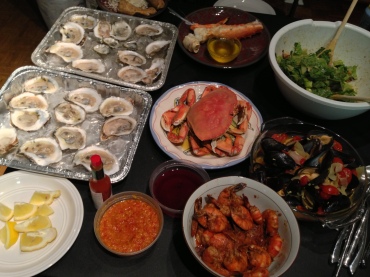 All this seafood…for two people. Yes, there were leftovers. Seafood pot pie tonight! 🙂

Treat yourself! Get seafooding! xx