Nothing cures a case of the Thursdays like relaxing music, good people and a glass (or two or three) of vino. It’s Thursday once again, and I am caught reminiscing of last week when I hurried down to Queen Street after work for a wine tasting at the iYellow Wine Cave. 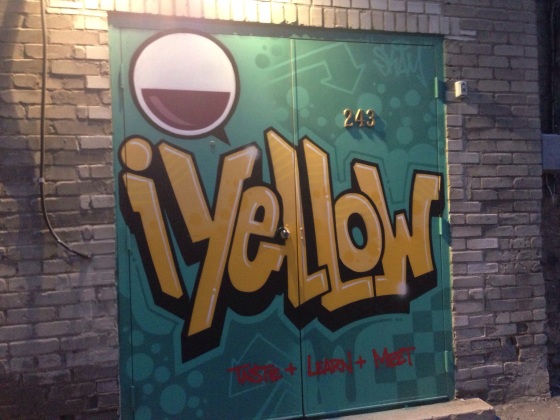 Don’t know where that is? Neither did I. The space belongs to the iYellow Wine Club and its’ doors are on an alley just south of Queen Street; it’s a hidden gem…or basement. Upon entry, you immediately take a staircase down into “the cave”. We entered from the bright, sunny outdoors into a cool, dimly lit cellar. I felt a little like I had entered into another world. The room had a cozy, relaxed feel to it and was decorated with hanging lamps, candles, bookshelves, mirrors, tables, comfy couches and WINE (of course).

I won’t lie, I’m no wine connoisseur. To be honest, I was a bit nervous at first about going to a wine event and not knowing enough about wine. Don’t sweat it. I found out within minutes that iYellow wasn’t about wine snobbery, but wine education…and fun! The iYellow Wine Club is a free-membership community of wine lovers founded by Angela Aiello with over 10,000 members. It’s a place where you can taste, learn and build wine confidence. I got a chance to chat with Angela, who explained the whole idea behind the club and told me about some of the events and tours they hold. They hold wine tastings, tours, classes, vacations and other events. Check their website for more details.

Entrance to the cave.

No intros needed. Read my glass.

I was handed a wine glass and the evening began. This was a tasting event for a South African Chardonnay by Fleur Du Cap Wines. The wine was full-bodied and delish. (With my unrefined palette) I would say there was a nice fruitiness to it and I did go back for more…and more…and more. I found out this wine sells for about thirteen bucks a bottle at the LCBO. Bargain!

I jumped a little with excitement when I started to smell scallops sizzling on a pan nearby. The event was also catered by Sliced Gourmet. Scallops and quail were on the menu and both were cooked using the featured wine. Genius…and YUM. The roasted quail was served with preserved lemon over a bed of mielie pap (a South African staple very similar to polenta) with a balsamic drizzling over top. Scallops were seared and served over puréed peas with asparagus on the side. Some may have found the quail a little awkward/difficult to eat at an event as such, but we all know I have no problem going all cave woman in public when it comes to eating food. The wine paired wonderfully with both dishes. 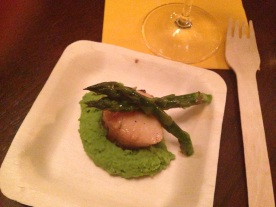 All in all, it was a lovely time! I brought a friend and we mingled, nibbled and sipped to our hearts content. It did get a little crowded at one point, but I didn’t mind. It was short and sweet, lasting only a couple hours; perfect for a weeknight. Leaving the wine cave, I opened its’ door only to find that the sun was still out! Those two hours seemed so much longer, thanks to the enchanting effects of no windows. It was refreshing to know the night was still young (or younger than we thought) as we headed off to dinner.