It’s so easy to make your own delicious cranberry sauce! No preservatives like the store-bought kind, and it doesn’t plop out of the can…still in the shape of a can.

I made mine to go along with a roasted turkey. It turned out to be wonderful! You could even use it as a jam or jelly.

Bring all the ingredients together in a small saucepan. Bring it to a simmer. Most recipes I’ve looked at say to simmer for 20 minutes. I found the cranberries still looked quite solid. I had lots of time while my turkey was cooking, so I left the cranberries lightly simmering on low for about an hour, and sort of smashed the berries up with a wooden spoon. 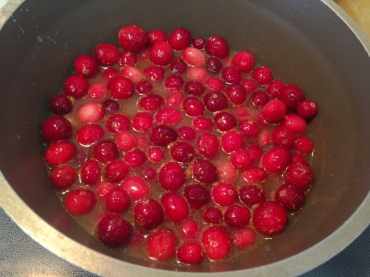 It was exactly the texture I wanted. A perfect jelly. Totally worth whipping this up quickly, and the cinnamon adds a lovely touch of spice.

Lentil soup should be in every cook’s repertoire. What’s more comforting than a steaming hot bowl of this fragrant hearty soup? It also doesn’t cost much to make and is good for you! Lentils are low in calories and high in nutrition. They are full of both protein and fibre and are said to help lower cholesterol, stabilize blood sugar,and improve heart and digestive health. Lentil soup is one of my Middle Eastern favourites! I used chicken broth, but this can be vegan friendly by using vegetable broth instead. 🙂

If you’re from Toronto and you like Middle Eastern food, you must have heard of Jerusalem Restaurant. Established in 1971, it was the first Middle Eastern restaurant established in the city and is said to be one of the best. I remember going there as a child with my family. I love their lentil soup, and when I came across the Jerusalem recipe in the paper I figured it was about time I made this soup for myself. (Why have only a bowl, when I can have a whole POT?) I used the recipe as a guideline, but changed a few things here and there. For starters, I decided to add split peas. I also love split pea soup, so I figured combining both would be twice as good. I also chose to do it in the slow cooker, but you can totally make this in a pot on the stove if you don’t have a slow cooker. 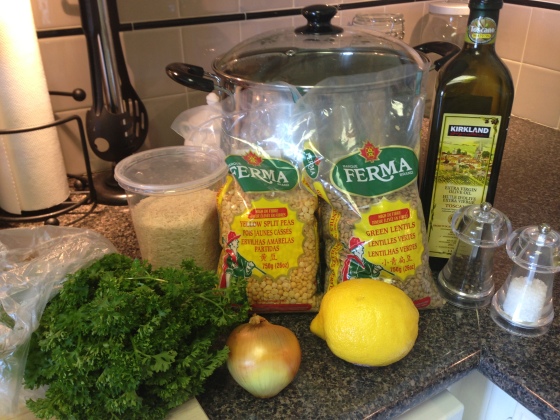 First, saute the chopped onions and garlic in a pan with the olive oil, until lightly browned.

Rinse the lentils, split peas, and rice under cold running water in a sieve. 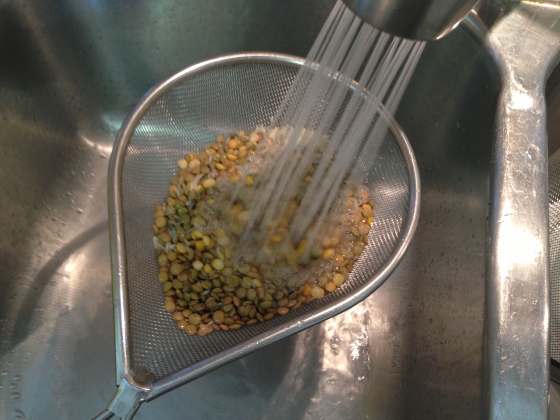 Put the sauteed onions, along with the rinsed lentils, rice, and split peas into the slow cooker (or pot) and cover with 8 cups of chicken broth.

I set the slow cooker for 8 hours on low. (If you’re going to try it in a pot on the stove, you could probably bring to a boil and then simmer for an hour or so.) You want to cook until the rice, lentils, and split peas start to kind of dissolve. The soup becomes more mushy and creamy. If its not as creamy as you want it, let it cook for longer and break apart a bit more. (You can always add a bit more broth if it becomes too thick.)

I waited to add the rest of the ingredients near the end (at around 7 hours). Add the salt, pepper, ground cumin, and chopped parsley. You can add more or less of things. Taste it and adjust to your liking! Let the soup continue cooking for the remaining time set on the cooker. I find the longer you cook it, the better it is. An extra hour doesn’t hurt. (If you’re making this on the stove, I’d say stir in the remaining ingredients and let it simmer for another 5 or 10 minutes.) 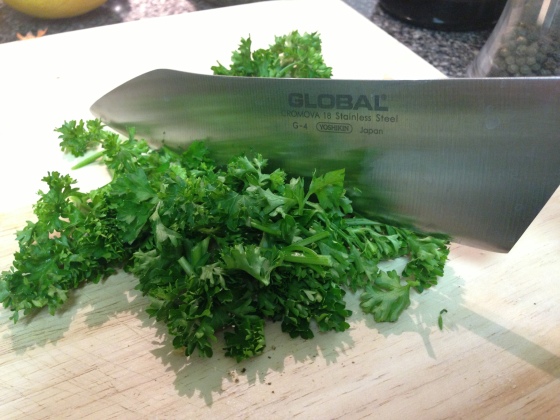 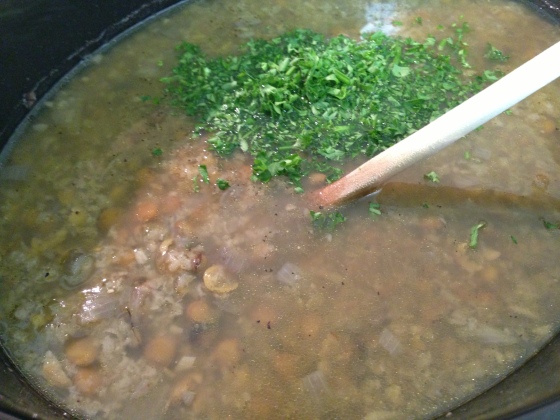 Mix the lemon juice in just before you serve. Always serve with lemon wedges! The yummiest thing about lentil soup in squeezing in the extra lemon juice. I love how the tartness of the lemon tastes with the flavour of the soup. So delicious!

Oven-roasted veggies are always a super easy addition to any meal. I roasted some asparagus tonight. Asparagus is full of nutrients, anti-oxidants and fiber. A quick and healthy recipe!

Preheat the oven to 350 degrees F. Now wash and trim your asparagus. I always snap the end off with my hands. This gets rid of the tough parts.

Lay the asparagus on a baking tray lined with parchment paper (or foil). Drizzle olive oil over top, add some minced/pressed garlic (however much you like, I love tons of garlic) and season with salt and pepper. 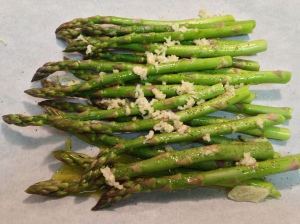 Bake the asparagus for about 10-15 minutes (until just tender). Baking time varies depending on how think your asparagus is.

Ready to eat! Wasn’t that easy? You can do this with tons of different veggies! Sometimes I sprinkle a little lemon juice over top after baking.

Error: Twitter did not respond. Please wait a few minutes and refresh this page.